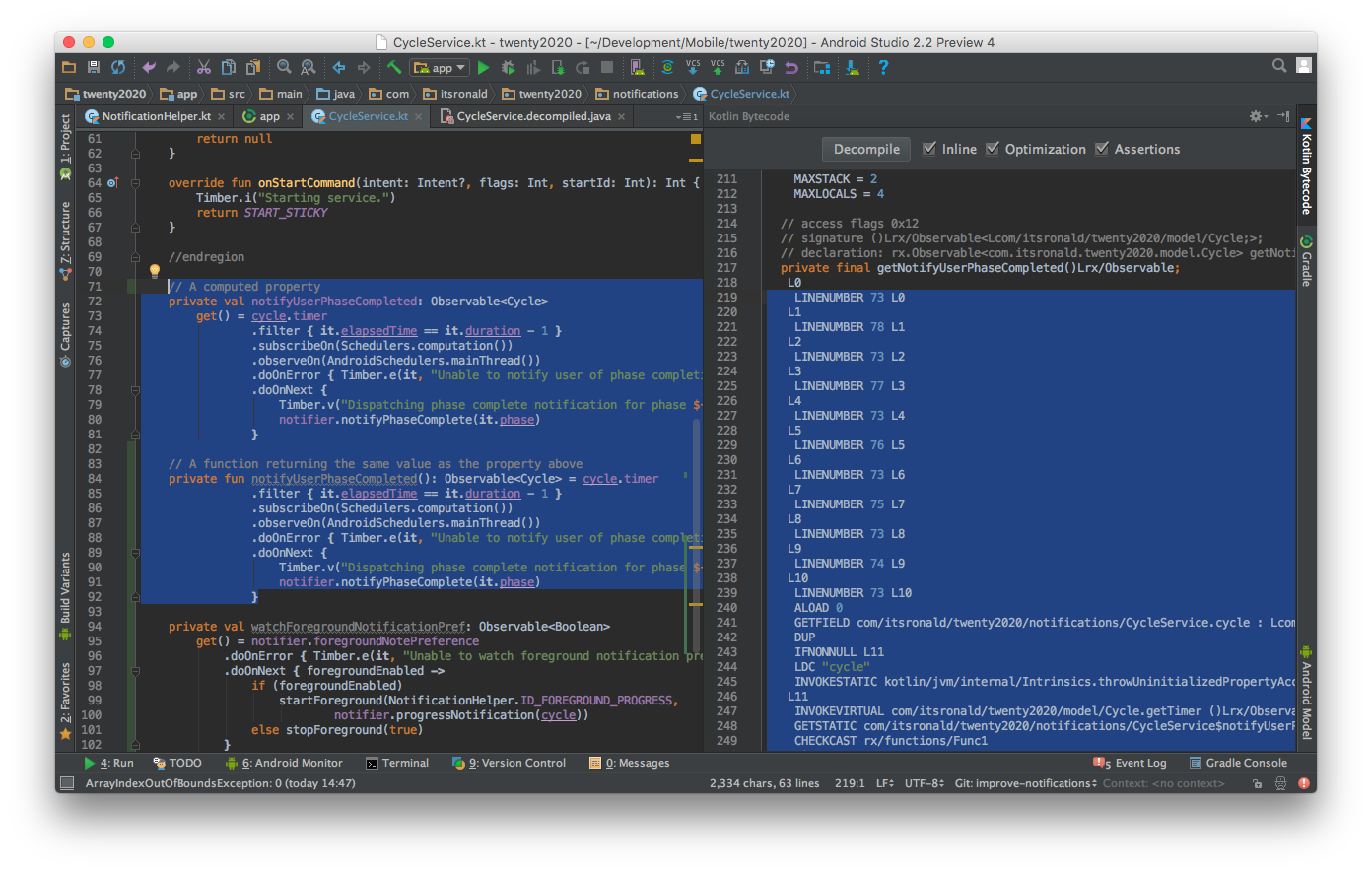 Note: this post assumes familiarity with Java language features and conventions. RxJava familiarity is useful, but not required.

I was curious today about the relationship of Kotlin’s computed properties and methods. They do very similar things, so are they implemented similarly? (Spoiler: Yes. Yes they are.) Somehow, however, I also ended up drawing some conclusions on the semantics of reactive Observable generation. Kotlin’s computed properties can be a powerful tool for expressing your program’s intent with Observables, but you should think twice before using them for that purpose.

The examples of RxJava usage I’ve seen online generally use factory methods to produce Observables consumed by their subscribers. For example, using Retrofit, we’d define an API call that returns an Observable, and then later we could call this as a method on our generated service.

Use it while chaining Observables:

This is not only very easy to understand, but pretty much the only way to do this because our listRepos() method needs an argument. What if, however, we had some other method that takes no params? Could we then access an Observable as a member on some other object instead of via one of its methods?

It is in fact very possible to do something like this:

whereas a more traditional implementation would look like this:

There are a few things about the previous that I think are worth pointing out:

Let’s get to what got me curious about in the first place. Say you have a class like Stopwatch that has some state you’d like to observe. Additionally, you aren’t restricted by the need for a parameter like the GitHub username in our very first example. Should you be using the approach A with some observable property, or approach B with methods?

Kotlin has a number of features that expand what is possible in Java. For the question posed above, I am particularly interested in what I’m going to call a computed property (name taken from the equivalent feature in Swift): a field on an object that does not actually store a value, but instead uses a custom getter (and optionally, a setter) to implement normal property access. Let’s illustrate this with an example:

Both computed and non-computed properties are accessed the same way:

Now, we don’t have to compute our property value from other object properties. Let’s look at a familiar example:

Yes, it’s our Stopwatch example A from before. Obviously, we can also implement the alternate implementation B in Kotlin as well:

There is hardly any change to our Java code when it comes to actual usage, too:

Notably, the read-only computed property approach does not have one of the same issues as the public final field approach in Java. Earlier we noted that if an Observable field depends on some kind of external state, the public final approach is untenable because the field would need reassignment in order to generate a modified Observable. Since a computed property uses its getter to generate a new value each time it is accessed, it is “reassigned” each time it is called.

Let’s look at an example:

As you can see, both versions end up producing the same value. Furthermore, A is not subject to arbitrary replacement by some other Observable – it is marked as read-only (val) and cannot be reassigned.

…are in fact just functions?

Intuitively, it makes sense that a read-only computed property is just some syntactic sugar on top of methods. When you look at the property definition, the get() = ... is literally defining a custom getter method to be used for property access. What does its declaration indicate?

We can read that as “if you access me on/give me an object instance, I will give you an Observable<Long>.” In mathematical terminology, a relation that maps an input to an output is called a function.

Are all properties just functions inside? The conspiracy deepens.

…are indeed functions under the hood

Let’s check this out. It’s possible that there’s some subtle difference here that might contribute to our “property vs method” debate. Maybe there is some overhead in using computed properties… or will it be the other way around? This is the question that inspired this post, and we will find the answer!

In all seriousness, it’s pretty easy to find out. I propose a simple test: look at the code generated from each of the property and function implementations and see how both differ.

The Kotlin plugin to IntelliJ provides a nifty feature that lets you look at the Java bytecode generated from any given Kotlin code. You can access this easily by tapping Cmd+Shift+A and typing in “bytecode.” 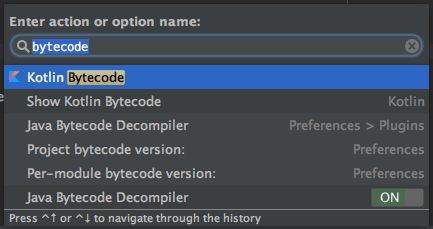 Here is the generated bytecode for our Observables in the class above using Android Studio 2.2-Preview 4 and Kotlin v1.0.2-1:

Stopwatch.kt bytecode for currentTime and start()

That’s a bit hard to parse, though the bytecode doesn’t look terribly different. Perhaps this will be clearer if we decompile this back into Java using the sweet new Decompile button on top here:

Surprise, surprise. currentTime and start(), and their generated counterparts getCurrentTime() and start(), have exactly equal implementations. They are the same except for their names! While we used a bit of a trivial example, I also went ahead and tried this with some much more complex Observables and ended up with the same result.

Read-only computed properties are just functions under the hood.

Let’s do a quick comparison.

In pure Java, you are almost certainly better off using the method implementation of Observable generation. There is a reason that you fairly exclusively see this practice in examples, and it all comes down to safe usage patterns through encapsulation.

As a reminder, exposing an Observable field on an object:

Methods, on the other hand:

Kotlin’s property syntax allows a very different style of programming than when only using Java. As we’ve found, using a computed property gives us the power of a getter method with the access pattern of an object field.

With regard to data generation, computed properties:

I submit that perhaps, then, computed properties are a solid alternative to methods for many data types. Certainly they have the capacity to clarify the intent of our programs. If your computed property is just a thin API that provides access to an in-memory field, you should definitely be using it instead of a method.

Most Observable objects are complex and expensive to create. If your computed property instantiates a new Observable every time it’s accessed, using a method better signals that we are building a new object that shouldn’t be used carelessly.

Some Observables have side effects

If the Observable you expose as a property implements doOnNext(), you have now introduced unknown side effects in what is supposed to be a simple data access.

Or, if you have assigned a Scheduler to the Observable, you may have just created a new thread, unbeknownst to the caller! When using a method, there is an implicit understanding that the code body might just do more than accessing a value.

Asynchronous interactions are notoriously difficult to reason about. The Observable class is meant to ease some of the cognitive load on the programmer, but it still remains that they represent some kind of potential asynchronous value. This leads back to the first point that Observables aren’t simple and that methods better reflect their complexity. In fact, many common Observables represent long running operations, and actions an object takes are better represented as methods.

Note: A good resource I found on this subject is the MSDN guide on “Choosing Between Properties and Methods”.

TL;DR: Kotlin computed properties are just methods, but that doesn’t mean you should be using them to expose your object’s Observable API.

Now it’s time for me to start migrating my computed Observables to straight methods… :-P 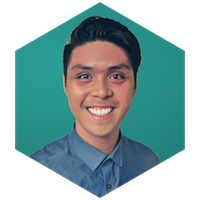